Letter to the Editor

A particularly inane op-ed has been making the rounds in small town newspapers regarding the current upheaval in Egypt on the subject of American aid the past two weeks including my own hometown paper, the Spokesman-Review of Spokane, Washington.

Written by one John Quigley, a professor emeritus of law at Ohio State University, it makes the argument that the United States should cut military aid to Egypt following its violent crackdown on Muslim Brotherhood protesters. Yet the justification for this move is not to reprimand the military coup for its wanton repression, but to ensure Egypt’s return to a once “united Arab-country front in support of a just accommodation for the Palestinians vis-a-vis Israel.” He reasons that the Camp David Agreement, from which this aid stems and which he believes fractured this unity, “has been disastrous for the cause of peace in the Middle East.”

Aside from the op-ed itself being quite poorly written and reasoned, it conveniently overlooks the fact that 1) the Israeli-Palestinian conflict has little to nothing to do with the current upheaval in Egypt and 2) the period of imagined unity for which the author yearns was one of violently destructive and globally destabilizing interstate warfare.

To the latter point, I offer my response.

Earlier this week I presented a paper at the Annual Association for Israel Studies conference at UCLA. The panel was entitled, Emotional and Philosophical Motivations in the Israeli-Palestinian Conflict and its Resolution. My paper, in turn, was “Giving Without Receiving? Justifying Unilateral Territorial Withdrawal in Israeli Politics.” If you are interested in the paper or the presentation materials, please let me know. Check out an abstract after the jump.

END_OF_DOCUMENT_TOKEN_TO_BE_REPLACED

Panel and Paper at AJS Conference

Next week, I will be making a quick trip to Chicago for the annual conference of the Association for Jewish Studies from December 16-18.

I am fortunate to be joining a panel of very talented academics including Arnon Golan, Rachel Havrelock, Jacob Lassner, and Yael Zerubavel to discuss the place of the Land of Israel in contemporary Israeli national memory and politics. I have included the panel abstract and my paper abstract after the jump. For a full listing of our panel and the AJS conference in general, click here.

END_OF_DOCUMENT_TOKEN_TO_BE_REPLACED

Symposium: The Two State-Solution: The U.N. Partition of Mandatory Palestine

The Two State-Solution: The U.N. Partition of Mandatory Palestine – Analysis and Sources

A Book Event in honor of Prof. Ruth Gavison

My dissertation explores how popular domestic beliefs regarding the meaning and value of disputed lands contribute to the protraction and resolution of international territorial conflict. Using comparative historical analysis and artefactual field experiments, I find in Israel and Serbia that persistent popular unwillingness to relinquish claims to a “United Jerusalem” and “Kosovo and Metohija” have resulted from the extraordinary position of these territories in their respective national homeland narratives. These outcomes stand in stark contrast to Israel’s largely popular withdrawals from the Sinai Peninsula, Southern Lebanon, and Gaza Strip, dominantly valued as strategic rather than cultural assets. They also contrast with Serbia’s acquiescence to the political independence of both Bosnia and Montenegro, spaces of high concern for Serb political self-determination but relatively low territorial-cultural priority. The Golan Heights and the West Bank are also analyzed as disputed spaces wherein strategic and cultural narratives continue to contribute to conflict protraction. In doing so, I demonstrate how particular strategic and cultural narratives come to dominate public discourse over disputed spaces and, in turn, how these narratives constrain the policies states can legitimately pursue in these spaces. Ultimately, I find that popular perceptions of national identity can be as powerful a force in determining government policy as state security prerogatives. 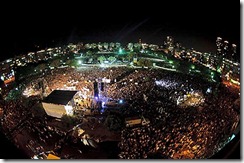 Yesterday evening, after my first Shabbat living in Tel Aviv, I joined 250,000 to 300,000 other people in the “March of Millions” at Kikar HaMedina. The Tel Aviv protest was one of several large protests held yesterday evening across the country, totaling some 400,000 to 450,000 people, demanding that the Israeli government readjust its agenda to dealing with socioeconomic and welfare problems which many believe to be the most pressing issues in Israeli society today.

The rally follows two months of widespread protest, largely in the form of tent cities which have cropped up all over Tel Aviv, Jerusalem, Haifa, and other towns across the country. Although the tents have been largely broken down and the daily protests have reduced to a trickle, last night’s rallies were meant to demonstrate that the demands of “the people” had not been silenced. Since I have addressed the basic substance of protesters’ demands in my previous post covering a recent poll of national priorities, I will not rehash them here. Rather, I will share my reflections from the rally itself.

END_OF_DOCUMENT_TOKEN_TO_BE_REPLACED

Poll: A Question of Priorities 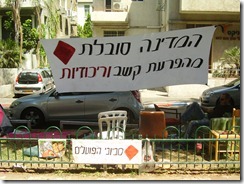 The summer here in Israel has been eventful to say the least. With the Arab world in turmoil, conversations here have often turned of late to the regional implications of protest, government repression, and revolution in two of Israel’s four immediate neighbors. Yet by mid-July, these discussions largely melted away with the emergence of large domestic protests over a host of social issues including high housing and consumer goods prices, low wages, eroded social services, and the current government’s free-market approach to managing the Israeli economy.

With thousands of protestors across the countries organizing marches, rallies, and tent cities particularly in Tel Aviv and Jerusalem, the government too largely shifted its focus from the Palestinian diplomatic front to these pressing domestic concerns. Unfortunately the distance between the government and the protesters remains quite large, with representatives of the various organizations which have joined the protest dismissing early initiatives put forward by the government appointed Trajtenberg committee.

END_OF_DOCUMENT_TOKEN_TO_BE_REPLACED

On Thursday, I attended a conference put on by the Women in Green in cooperation with Arutz 7,  Professors for a Strong Israel, and the Machpela Visitors’ Center in the Machpelah Visitors’ Center next to the Tomb of the Patriarchs in Hebron. The conference was entitled “Regaining the Initiative: Applying Israeli Sovereignty Over Judea and Samaria” or in Hebrew: היוזמה בידינו: ריבונות ישראל ביהודה ושומרון, meaning “The Initiative is in our Hands: Israeli Sovereignty in Judea and Samaria.”

The event was attended by hundreds of people from all around the country, largely of a religious demographic, to explore the idea of how and why formal Israeli sovereignty should be extended over the entire contested West Bank. Speakers included Ministers of Knesset Tsipi Hotovely (Likud) and Aryeh Eldad (Ichud Leumi), journalists Caroline Glick (Jerusalem Post) and Eran Bar-Tal (Makor Rishon), former diplomatic Consul to the United States Yoram Ettinger, and Professors Dr. Rafi Yisraeli, Dr. Yitzhak Klein, and Dr. Gabi Avital, and was moderated by Women In Green co-chairs Nadia Matar and Yehudit Katsover.

END_OF_DOCUMENT_TOKEN_TO_BE_REPLACED

Polls: The UNGA and a Palestinian State, Part 3

In the previous two posts, I have explored the Israeli public response to the Palestinian Authority’s intent to unilaterally declare independence and seek international diplomatic recognition at the UN General Assembly in September 2011.

Monthly public opinion data gathered by the Peace Index over the last six months indicates that Israelis are increasingly of the belief that the PA’s efforts are credible and that Israel will suffer international condemnation, greater diplomatic isolation, and potentially a new Palestinian intifada if it refuses to recognize a Palestinian state in the territories of Gaza, the West Bank, and eastern Jerusalem. However, polling also indicates that Israelis believe that international pressure will not increase significantly nor would greater political moderation by the Israeli government result in a Palestinian return to negotiations or the aversion of a new violent Palestinian uprising, particularly if Israel still refuses to withdraw from the West Bank.

END_OF_DOCUMENT_TOKEN_TO_BE_REPLACED

Polls: The UNGA and a Palestinian State, Part 2

In yesterday’s post, I explored the issues surrounding the Palestinian Authority’s initiative to receive diplomatic recognition for a Palestinian state in the whole of Gaza, the West Bank, and eastern Jerusalem and the Israeli public’s reaction to this initiative.

Analyzing recent public opinion data, it is clear that Israelis believe that the PA will go forward to the UN while continuing to avoid negotiations with Israel. It is also clear that Israelis believe that UN General Assembly recognition for a Palestinian state will cause Israel to become more diplomatically isolated, potentially be subject to international economic sanctions for its continued presence in the West Bank, and potentially even face a new violent Palestinian uprising. Given these pressures, I posed the question: why does Israel not simply accede to Palestinians demands, withdraw from the West Bank, and recognize a Palestinian state?