Polls: The UNGA and a Palestinian State, Part 2 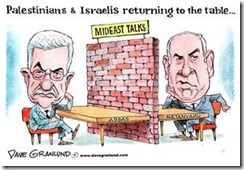 In yesterday’s post, I explored the issues surrounding the Palestinian Authority’s initiative to receive diplomatic recognition for a Palestinian state in the whole of Gaza, the West Bank, and eastern Jerusalem and the Israeli public’s reaction to this initiative.

Analyzing recent public opinion data, it is clear that Israelis believe that the PA will go forward to the UN while continuing to avoid negotiations with Israel. It is also clear that Israelis believe that UN General Assembly recognition for a Palestinian state will cause Israel to become more diplomatically isolated, potentially be subject to international economic sanctions for its continued presence in the West Bank, and potentially even face a new violent Palestinian uprising. Given these pressures, I posed the question: why does Israel not simply accede to Palestinians demands, withdraw from the West Bank, and recognize a Palestinian state?

As with most issues in the Middle East, nothing between the Israelis and Palestinians is that “simple.”  In this post I will attempt to delineate some of the more pressing reasons for Israeli intransigence based on monthly Israeli public opinion polling conducted by the Guttman Center for their Peace Index Project. First and foremost, it is notable that while Israelis do believe that Israel will face pressure both internationally and domestically following presumed UN General Assembly recognition of a Palestinian state, they are skeptical that the results will be catastrophic. While Defense Minister Ehud Barak’s statements earlier this year that the country will face a “diplomatic tsunami” if it does not “advance peace” in response to international pressure received considerable press, as a whole Israelis disagree.

Indeed, this claim is overwhelmingly rejected by the general and Jewish public at 65.1% and 70.6% respectively. Such a strong rejection from the Israeli Jewish public in particular is notable given that it is this sector which would be most directly targeted by the moral opprobrium of international isolation. By contrast, the Israeli Arab public expressed a stronger belief that Israel does face a tsunami at 47.8% as opposed to 34.4% that Israel only faces worse diplomatic relations. This sector’s level of uncertainly, however, is significantly higher than among Jewish Israelis.

June 2011: How would you describe Israel’s standing in the world today?

Israeli skepticism toward the “tsunami” claim may be partially reasonably explained by the fact that Israelis, on the whole, already feel that their country is relatively isolated on the international stage. Indeed a plurality of both the general and Jewish population specifically agree that Israel is “somewhat isolated” at 43.8% and 47.6% respectively followed by “fairly unisolated” at 34.6% and 34.4% respectively.

For many, the pressures which threaten Israel following UNGA recognition of a Palestinian state are perceived to be not much of a deviation from the norm. Given highly disproportionate condemnation of Israel in multiple international diplomatic fora and open sympathy for the Palestinian cause (often coupled with hostility toward Israel) in Western Europe, not much is expected to change. This may also be why a slight majority of Israelis believe that they can avoid recognition of a Palestinian state after September 2011.

May 2011: If there is a Palestinian declaration of independence without an agreement with Israel, and a UN majority recognizes the Palestinian state, in your opinion will Israel then be able or not be able to allow itself to refrain from recognizing the independent Palestinian state?

Opinions are obviously split but still a plurality of the public are of the belief that such pressures can be resisted. Among the general public, some 48.8% believe Israel can refrain from recognition while 45% believe it cannot. Similarly among the Jewish public, 48.1% believe it can resist these pressures while 46.8% believe it cannot. While the strongest responses come from those in the “no” category, the “definitely no” category received a disproportionately weaker response than the other three. The greater belief that Israel can withstand pressure from the general public relative to the Jewish sector may be attributed to a skeptical Israeli Arab public which agrees at 53.3% and disagrees at 34.5%. Again, note their highly level of uncertainty.

May 2011: From what you know about the current Israeli government, in your opinion, will it recognize or not recognize a Palestinian state in the event that such a declaration is made and receives the support of most of the states in the UN?

As to whether or not the Israeli government will recognize a Palestinian state in September, most strongly believe that it will not, with 70.2% among the general population, 71.2% among the Jewish sector, and 64.4% in the Arab sector. This does leave the question open of what position a different government, say one headed by Kadima or Labour, would take. However, an election does not appear likely in the near future, and, in any event, even in projections about the next election if several new/old players were to enter the arena indicate that although Likud may lose seats, Kadima and Labour would lose even more.

Coupled to expectations of relative political stability and little change on the international stage, there is a strong belief among Israelis that a Palestinian declaration and the international pressure and violence which may accompany it are all but inevitable.

May 2011: In your opinion, could Israel or could it not have prevented the Palestinian push for UN recognition of an independent state if it had shown greater flexibility in the political negotiations in recent years?

In the first instance, Israelis are relatively strongly convinced that even if Israel were to have shown greater flexibility in negotiations in the past with the Palestinians, it would not have avoided the PA’s current push for UNGA recognition. Among the general population, belief in this inevitability is reported at 52.6% compared to only 42.2% believing that such an outcome could have been prevented. This is complimented by a stronger belief of inevitability among the Jewish population at 54.9% to 39.6%. Notably, the “yes” response still received almost as strong percentage in the Jewish population as the “no” and “definitely no” responses highlighting that a not insignificant number of Israelis still believe that negotiations may be moderately efficacious at least in preventing the Palestinians’ current diplomatic offensive. Unsurprisingly, Israeli Arabs demonstrated a nearly mirrored responses to the Jewish sector professing the efficacy of greater flexibility at 56.8% versus 38.8%.

May 2011: What, in your opinion, are the chances that if Israel indeed moderates its positions significantly in its dealings with the Palestinians, the latter will not declare an independent state in September nor seek UN recognition if an agreement with Israel has not yet been reached?

Now that the PA push is already in full swing, Jewish Israelis in particular believe that, no matter Israeli moderation, a declaration of statehood is inevitable at 64.4% versus only 26.4% believing this outcome was avoidable, closely mirrored by the general population at 60.9% to 30.9%. As before, the percentage of those Jewish Israelis who believe avoidance is possible is not insignificant at 21% but this contingent is much weaker than in the previous question. The Israeli Arab population is here more divided at 40.6% believing a declaration to be inevitable and 56.1% believing it to be avoidable.

Perhaps more critically, Israelis have expressed the belief that a new Palestinian intifada following declaration of statehood is more likely than not regardless of Israel’s political program. Although less pronounced that the expectation that the declaration itself will go forward, that over 50% of both the general and Jewish populations believe a new intifada to be unavoidable may also help explain Israeli unwillingness to accede to Palestinian demands. Notably, even Israeli Arabs more expect a new intifada to break out than not regardless of Israeli policy contrary to their belief that Israel might be able to avoid a declaration of state with greater moderation.

May 2011: Assuming that it is not too late, in your opinion, should Israel or should it not significantly moderate its political positions in its dealings with the Palestinians over the coming months so as to prevent a Palestinian declaration of independence without an agreement between Israel and the Palestinians?

Even as expectations of consistent domestic and international pressures and of a Palestinian declaration of state and violence, on the whole Israelis still do not believe that Israel should moderate its position vis-à-vis the PA even if it were to lessen the chance of a unilateral declaration and, as a result, a new intifada. Indeed, opposition to further moderation is quite high in the Jewish population at 59.7% at opposed to 36.5% in favor of such moderation. As expected, Israeli Arabs mirror this sentiment at 27.8% opposed to further moderation and 59.9% in favor. Uncertainly, however, is much higher in the Arab sector at 12.3% versus 5% and 3.8% in the general and Jewish populations respectively.

Yet we are still left at an impasse of understanding. Israelis certainly oppose the PA’s withdrawal from the negotiating table and their subsequent unilateral moves to receive international diplomatic recognition for statehood within the whole of Gaza, the West Bank, and eastern Jerusalem, however they are more opposed to the idea of a bi-national state, strongly prefer a two-state solution to the conflict, and remain strongly supportive of continued negotiations with the PA. How can this desire to both preserve Israel as a Jewish state and the achieve peace with the Palestinians be reconciled with apparent Israeli unwillingness to accommodate the declaration of a Palestinian state in the near future?

It is this theme which I will explore in greater depth in tomorrow’s post. Stay tuned for part three.

This entry was posted on Thursday, July 21st, 2011 at 6:00 am and is filed under Israel, Pictures, Public Opinion, Research. You can follow any responses to this entry through the RSS 2.0 feed. You can leave a response, or trackback from your own site.

One Response to Polls: The UNGA and a Palestinian State, Part 2