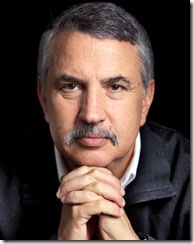 I generally do not use this blog to comment on Op-Ed pieces in the popular press, but for New York Times writer Thomas Friedman, I will make an exception.

Friedman’s latest piece, Bibi and Barack, opens with an obvious observation, the Middle East is going to hell in a hand basket and things could really blow at any minute. In this tumultuous setting, he asserts that there are things which are “unmanageable” and those which are “unavoidable”. What is unmanageable is another war between Israel and its neighboring Arab states; what is unavoidable is dealing with a more unstable Arab world. Given this, we must manage the unavoidable and avoid the unmanageable. Therefore, these realities must be faced with a “serious peace policy” and a “serious energy policy”.

The need for a “serious energy policy” is obvious enough. If the United States’s key oil suppliers are likely to be in perpetual tumult (although Saudi Arabia at #2 and Iraq at #7 are the only Arab states in the US’s 10 top of oil suppliers), than it needs to make an active effort to invest elsewhere, allowing for new oil drilling so long as it is done “under the highest possible environmental standards," and, more importantly, in alternative energy sources. This is managing the unavoidable.

Where Friedman makes his most serious error is in assuming that managing America’s enormous appetite for oil must be tied to a political resolution of the Israeli-Palestinian (or Israel-Arab) conflict. He suggests that because Israel is facing “a more democratic and populist Arab world” (much more the latter than the former) and its detractors accuse it of being an apartheid state in which a “minority of Jews” may soon rule over a “majority of Arabs,” it must “use every once of its creativity to explore ways to securely cede the West Bank to a Palestinian state.” This, he believes, is the only way that Israeli PM Netanyahu “can be taken seriously again” because “he has spent his time trying to avoid such a deal — and everyone knows it. No one is fooled.”

There are so many things wrong with this message that I have a hard time expressing them in a single post. To begin with Israel’s “strained relations” with the “three regional superpowers – Turkey, Iran and Egypt – plus rapidly eroding support in Europe”, Friedman says although they are not entirely Israel’s fault, its ties with Egypt, Turkey, and Europe will never improve if Israel does not withdraw from the West Bank. Europe aside, Israel’s strained relations with Egypt, Turkey, and Iran have little to nothing to do with the lack of a political resolution to the Israeli-Palestinian conflict. Indeed, elites in all three countries have benefited from using the Palestinian issue to leverage and distract from their own domestic political failures, but they are clearly not the source of unrest in any of the three.

Instability in Turkey and Iran has only increased their regimes’ anti-Israel rhetoric and, with Mubarak out of the way, the Muslim Brotherhood in Egypt is now in a position to be more vocal about its rejection of peace with Israel. Israel’s or Bibi’s "failure" to make a Palestinian state may marginally increase the salience of their message but it is not the source of it. In the past, Israel has managed to persuade a select few Arab (and Turkish) leaders that peace with Israel would be in their temporal best interest, but the masses never agreed. Progress on the diplomatic front to the benefit of the Palestinians, whether in 1978, 1993, or 2002, has never had much of a depressing effect on the popularity of anti-Israel ideology.

If Israel were to withdraw from the West Bank today, it might give struggling Arab leaders a brief respite from their angry populations, but it would not be seen as their victory. Rather, in Egypt, it would play to the support of the radicals, Islamist and otherwise, that the United States has no interest in seeing in power and it would bolster the position of open Islamists in Turkey and, of course, Iran. If instability is the “unavoidable” reality of the new Middle East, tossing a bone to those who threaten regional stability would neither make Israel more secure nor would it support the American national interest. To say that ceding territory today would mean a more welcoming Arab world is foolish at best.

Next, the demand that Israel "put a map on the table" before negotiations even occur is not new. With every round of negotiation, it has been clear that the maximum Israel can offer is less than Palestinians are willing to accept. It is also true that the Palestinians and the international community at large have demanded a more expansive map than every one previous. A map must be produced at some point, but it is not wise for Israel to produce yet another  until 1) it is clear that the Israeli public supports it and 2) that Israel’s western "allies" will stand by her in insisting that the Palestinians cannot hope to take any more. Veiled threats from France and the UK to "recognize Palestine" in September are hardly reassuring in this regard.

Now what of the Hamas-Fatah rapprochement being in Israel’s security interest, as Friedman claims? The Palestinian leadership, both Fatah and Hamas, have rejected the very principle of peace with Israel, recognition of Israel as a Jewish state to which they will have no further claims after Palestinian statehood. Given this, one can hardly blame Bibi for having "spent his time trying to avoid such a deal." A deal in which you chop off your left arm so that the other party can next claim your right is no deal at all. Perhaps Netanyahu needs to be “addressing the Palestinians down the street” more so than the US Congress (which, by the way, is overwhelmingly unsupportive of President Obama’s confrontational approach to Israel). Yet neither Hamas nor, increasingly, Fatah are appropriate filters for that address. Giving a state to authorities which are neither trusted by most Palestinians nor are willing nor able to give peace to Israel in exchange is not in anyone’s security interest.

Even if the Palestinians are unable to deliver on peace, Friedman and others claim a trump card: the so-called demographic threat. Arabs, they claim, will soon outpopulate Jews in the whole of Israel forcing the country to choose between democracy and the dismemberment of the Jewish state or apartheid and the dismemberment of the democratic state. While Friedman’s demographic alarmism does have basis in fact, the concern is more that the populations are creeping to parity, not that one will rocket past the other in the near future. Moreover, there is mounting evidence to support the contrary approach, both that the Palestinian population in Israel (including Gaza and the West Bank) is perhaps 1 to 1.25 million less than is often claimed and that Palestinian population growth is on the decline while Israeli growth is on the rise. These factors are important policy considerations, but they are hardly the sole basis on which to rush into premature territorial partition.

In the end, one must recognize that Friedman’s interest here is not the long-term viability or survivability of Israel, but the American national interest. His logic is familiar: Arab countries are unstable and Arab countries have oil. The United States needs oil and Arab countries have claims against Israel. Ergo, demanding Israel to acquiesce to Palestinian demands may help secure a steady supply of oil, or at least fewer headaches, for the United States. Yet let us return to the first point. Instability in Arab states (and Iran) today has nothing to do with Israel and the popularity of anti-Israel rhetoric does not meaningfully vary with Israeli concessions.

As an American, Friedman cannot be blamed for looking out for his country to the detriment of others, even if the other in this case has long been a reliable American ally. Yet given the conditions prevalent in the Middle East today, the cost of selling out an ally is hardly worth the marginal and temporary returns it will generate. The founding of a Palestinian state today under the presumably unified leadership of parties that reject the notion of permanent peace with Israel will undoubtedly serve as a rallying cry for precisely those forces that the United States does not want in power in the region. That Friedman still believes that further Israeli concessions will somehow bolster the tenuous American position in the Middle East is nothing short of incredible. Following his course will not only complicate management of the unavoidable, but make the unmanageable entirely unavoidable.

This entry was posted on Friday, May 20th, 2011 at 3:40 am and is filed under Israel, News, Research. You can follow any responses to this entry through the RSS 2.0 feed. You can leave a response, or trackback from your own site.