Many questions have been raised in the last week about the so-called Palestine Papers leaked to Al Jazeera and the Guardian newspaper. The collection of over 16,000 seemingly official documents purportedly reveal salient details of meetings, emails, and other communications between Israeli, Palestinian, and American negotiators between 2000 and 2010.

Most commentators have focused on the concessions the Palestinian Authority supposedly offered to the Israelis to secure a peace settlement. Significantly less attention has been paid to what Israeli diplomats in these meetings are recorded as considering or offering. One of the most interesting observations in this respect was a proposal by Tzipi Livni in 2008 to transfer the Israeli Arab towns of Barta’a, Baka al-Garbiyeh, and Beit Safafa, situated along the Green Line, to Palestinian control. This approach, which has been publically disallowed by Kadima, has notable similarities with Israeli Foreign Minister Avigdor Lieberman’s peace plan.

This approach is based in the belief that if, in a two-state solution, Israel is to be the national homeland of the Jewish people and a Palestinian state is to be the national homeland of the Palestinians, the latter state should encompass the Palestinian population of Israel. In principle, this repartition of the land irrespective of the Green Line is consistent with most major Israeli political parties’ insistence that the state of Israel should include as many Israelis and as few Palestinians as possible. The idea of a “populated” land exchange, Israeli Arabs and the villages in which they reside in exchange for formal Israeli annexation of Jewish communities in the West Bank, is not new in Israeli politics.

Lieberman’s plan, however, is seen by many as a threat to the character of Israeli democracy. Its realization, critics argue, would strip Arabs of their citizenship without their consent; a fundamental violation of their rights as citizens of Israel. Yisrael Beiteinu has insisted that any such moves would be contingent on Israeli Arabs taking loyalty oaths to the state, while softer supporters have argued that any such moves would require Israeli Arabs’ consent. While some have reported the Livni might quietly support this policy assuming it received the ascent of Israeli Arab communities in question, publically she has expressed nothing but firm opposition.

This much maligned proposal of “populated” land exchange stands in contrast to the more widely accepted idea of land swaps; that in exchange for permanent Israeli control of Jewish communities beyond the Green Line, a Palestinian state would receive 1:1 compensation of unpopulated land in Israel. This was the cornerstone of both Ehud Barak’s 2000 offer to Yasser Arafat at Camp David (some 91% of the West Bank, all of Gaza, and a land corridor connecting the two) and Ehud Olmert’s 2008 offer to Mahmoud Abbas (some 94% of the West Bank, all of Gaza, a land corridor connection the two and other equivalent compensation for land ceded). It also serves as the basis for the Geneva Initiative’s plan for a two-state solution.

Palestinians-Israeli citizens and residents have also expressed considerable opposition to the idea of their neighborhoods and villages being transferred to Palestinian control in any final settlement. When such territorial exchanges were being discussed in the Camp David summit in 2000, a poll was conducted among Um Al-Fahm residents which indicated that only 11% supported the idea of joining a Palestinian state while 83% were opposed. In November 2007, the Arab Center for Applied Social Research conducted a poll in which 72% of respondents “definitely disagreed” with populated land exchange. A Saban Center poll conducted in late 2010 similarly indicated that 58% of Israeli Arabs are opposed to this plan. Meanwhile, Jerusalem Arabs indicated in a January 2011 Pechter Middle East poll that they too are profoundly ambivalent about joining a Palestinian state.

So what are Israeli attitudes toward either approach? It is generally accepted among Israelis that if there is to be a Palestinian state, it will not encompass the entirety of the West Bank. This assumes both that large Israeli settlements will not be dismantled and that Israel will maintain a military presence in the strategically sensitive Jordan Valley and highlands of Judea and Samaria. Israeli attitudes toward limited settlement evacuation are consistent with this evaluation. However, the idea of surrendering existing Israeli territory in compensation for retaining such spaces is hardly a national consensus.

In May 2006, the Peace Index asked several questions related to land swaps which are of particular interest here in the context of unilateral Israeli actions to determine its borders with the Palestinians. When asked if Israel could decide its borders without PA coordination, some 40.8% of the general public and 45.8% of the Jewish public expressed their strong support while an additional 21.7% and 24% expressed their basic support. This was a significant majority in favor of unilateralism. Fewer strongly believed that Israel was capable of making such a decision in opposition to the international community, with only 19.9% and 17.6% respectively, and 22.6% and 21.6% weakly believing.

Although support for such moves was notably dampened by a desire to receive international support for Israeli actions, Israelis were divided on whether it was important that Israel compensate the PA for territorial annexations in the West Bank. As seen below, the strongest responses centered on dismissing the need to compensate the PA, while the second strongest response was that it was weakly important. Among the general population, belief that compensation was important weakly outweighed the judgment that it was not (47.3 : 45.6) while the opposite was true for the Jewish population (40.8 : 51.4).

How important is it to compensate PA for territories annexed unilaterally with territories in Israel? 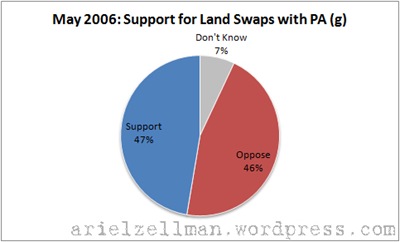 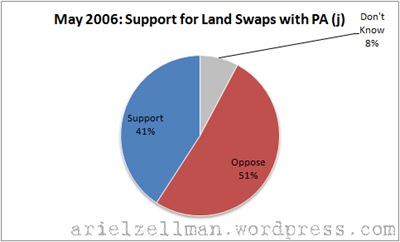 If taken as an indication of Israeli support or opposition toward land swaps, with the “very important” and “important” responses taken as support and “not so important” and “not at all important” taken as opposition, there is a lack of strong preference among the general population and a weak preference for compensation among the Jewish population. In themselves, these responses do not offer much in terms of understanding why, when, or where Israelis are supportive of or opposed to land swaps.

The next question in the survey, however, offers significantly more direction. It asks whether respondents would prefer one of two proposals for a land swap, the western reaches of the Negev desert or the area of the “little Arab Triangle” including Umm al-Fahm and other Arab villages. The former represents an area which would be a clear land swap without population while the latter is clearly a case of “populated” land exchange. Also offered are responses of “no difference”, opposition to both, and no response/don’t know. The results were as follows:

May 2006: Support for Land Swaps with PA

Two shifts in the basic responses are immediately evident. First, when presented with the option of swaps involving specific spaces, uncertainty jumps in both the general and Jewish populations from 7% to 17% and 8% to 17% respectively. Second, opposition to territorial swaps markedly decreases from 46% to 23% and 51% to 19%. This decrease in opposition is hardly explained by the rise in uncertainty alone. Rather, we find that, when given the choice of withdrawal from populated or unpopulated areas, Israelis strongly prefer conceding Arab villages to open space.

Even if the Israeli results are a bit dated (I have not been able to find more recent Israeli surveys on the Lieberman plan or territorial swaps in general), this data does strongly concord with what is often taken as Israelis’ primary interest in reaching an agreement with the Palestinians: securing Israel as a Jewish-majority state. While survey data strongly suggests that Palestinian citizens of Israel would reject any move to place them under Palestinian sovereignty, it also confirms that Israeli politicians are likely to find strong domestic support among the majority Jewish population for such moves.

This entry was posted on Sunday, January 30th, 2011 at 9:26 am and is filed under Israel, Pictures, Public Opinion, Research. You can follow any responses to this entry through the RSS 2.0 feed. You can leave a response, or trackback from your own site.

6 Responses to Polls: Israeli Public Opinion on Land and Population Swaps for Peace