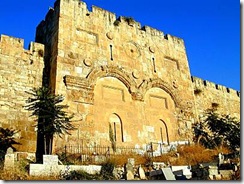 In an effort to get back on track with my blogging, here is a recap of the last three days: the first two in brief and yesterday in more detail.

On Tuesday, I finished packing up everything at Kfar HaStudentim, cleaned up my room, and with almost no trouble checked out. Then I caught a cab out to my new place in Rehavia. Once there, I cleaned out my room, put away a few things, and ran to the shuk to get food. In the afternoon, I mostly finished unpacking, swept and mopped up the apartment, and met up with a few friends in the evening.

Wednesday morning, I got in my first run in a few weeks and it was wonderful. Just west of my apartment is the far edge of Rehavia bordering on a beautiful valley: Emek HaMatsleva, which translates as “The Valley of the Cross.” It is named after the Monastery of the Cross, an 11th century Crusader Church which now houses the Greek Orthodox Patriarchate in Jerusalem. On the opposite side of the valley from Rehavia is the Israel Museum and the Shrine of the Book where the Dead Sea Scrolls are kept. My route in the valley also took me past the headquarters of HaTzofim, the Israeli Scouts, and Hora Jerusalem, the Israeli cultural dance center. Turning northward, I then ran around Gan Sacher in a valley which separates Nahlaot and nearby neighborhoods from the Knesset and Supreme Court. Running around the valley is much easier than running down into it or up from it.

Wednesday otherwise was fairly low key. I found a coffee shop around the corner from me which I really enjoy. They had no problem with me sitting for two hours reading having only ordered a cup of coffee. In the evening, I met up with friends to go to a vegetarian Indian restaurant in the shuk. I wasn’t terribly hungry so I got a single small potato dish, which was really really tasty. I’ll go back next time with an appetite. In the evening, I met up with another friend to see Inception at the movie theater at Binyane Hauma. I am not in the business of writing movie reviews but I will say this: GO SEE THIS MOVIE! It lives up to all the hype and then some.

Thursday I went for another run on a similar path so I won’t bore you again with the details. In the morning I found that my computer was refusing to start… I fear it’s about to crash and burn. Once I was able to get it running, I backed up everything I could imagine and started looking into alternatives. Not a cool situation, but I might need to buy a new computer. I’ll see how much further I can push this machine before it really goes kaput.

In the early afternoon, I went to the Old City to meet up with a friend of mine visiting from Chicago with his niece. On the way, I walked through the new Mamilla Mall which borders the city walls. It feels really out of place, having such a swanky, upscale outdoor mall right outside of such a veritable cultural landmark, but given that once at the gates of the city you are always accosted by people selling crap anyway, this is a pretty natural transition. If there is one thing to be said for the mall, it is that the architecture is fantastic. While it is clear that everything is new and modern, it is built in a style (utilizing Jerusalem stone of course) which makes it transition almost seamlessly from new to old.

Once in the Old City, I hiked through the Christian and Jewish Quarters and then into the Kotel Plaza for mincha. Then I wandered a bit around the Arab shuk in the Muslim Quarter until I got a call from my friends. In trying to find them, I got really lost wandering into several Yeshiva complexes and rooftop routes in the Arab and Jewish Quarters I had never visited before. When we finally did meet up, we grabbed a quick lunch and then headed out through Sha’ar HaAshpot (Dung Gate) toward Ir David (the City of David), the site of the original city of Jerusalem. More on this in a bit.

We took a quick detour around the eastern wall of the Old City to check out the view of Har HaZeitim (The Mount of Olives), a cemetery that has been in use since biblical times. We then crossed the road and walked through the Muslim cemetery which borders the eastern wall in front of the sealed Sha’ar HaRachamim (Gate of Mercy or most often Golden Gate). This is the oldest of the gates in the current walls of the city, likely dating from 520 CE, and is built on top of the ruins of an earlier gate that gave pilgrims direct access to the Temple Mount.

According to Jewish tradition, it was to be through this gate that the moshiach (messiah) would enter Jerusalem and usher in the “world to come.” It was for this reason that the Ottoman Sultan Suleiman I sealed off the gate in 1541 to prevent his entrance. It was also arguably for this reason that the cemetery was constructed in the belief that the prophet Elijah, who was a Kohen, would not be permitted to pass through. Having never visited the gate before, it was an interesting experience. Leaving the cemetery we were stopped by frustrated security guards who clearly were not on duty when we entered. After a very brief “interrogation,” they let us go on our way.

Next we made our way to the City of David on the southern slopes of mountain/hill upon which the old city is perched. This is the oldest settled neighborhood in Jerusalem, dating back some 5000 years. Because of the many layers upon layers of history in this area, it is one of the most active archeological sites in the entire world. At the same time, it has become a hotbed of Jewish-Arab conflict. Primarily a Jewish neighborhood before 1948, the area was settled by Arabs under Jordanian occupation and continued to live and build there after it was captured by Israeli in 1967. Today the neighborhood is a tense mix of Jewish and Arab residents. I will hopefully be returning to the neighborhood soon to speak with people working for the City of David Foundation, an organization that purchases homes in the neighborhood for Jewish residence.

Our visit yesterday, however, was focused primarily on the archaeology. When I was there last about 5 years ago, plenty of fascinating findings had been uncovered, but there was very little formal about visiting the site. Now a tourist industry has been built up around the neighborhood complete with guided tours, admission tickets, gift shop, and snack bar. It was a little much for me, but at least the findings are being preserved and made available for public knowledge. We walked around the ruins on our own and got most of our information from placards situated near the digs written in Hebrew and English.

Afterward, we made our way into what is known as Hezekiah’s Tunnel, a tunnel dug during the reign of King Hezekiah in 701 BCE as a way for the residents of the city to safely access its principal water source, a spring at the bottom of the valley, during war-time. Once through the upper levels of the tunnel, one can either descend into the water filled passageway, or take a dry route the exits on a higher part of the valley. My friends took the wet route, I took the dry path, and we separated for the day.

From here, I made my way to Gan HaAtzmaut (Independence Park) for the start of the Jerusalem Gay Pride Parade. There were an interesting assortment of speakers before the parade started off; leaders of the Jerusalem and Israel gay community, representatives of leftist political parties, namely Meretz and Hadash, among others. Most of the speeches from what I gathered were about demanding social equality for the LGBT community in Israel and an end to homophobia. Other speakers used the podium as a platform for unrelated topics: protesting Jewish residence in Arab neighborhoods, settlements, checkpoints, and promoting international socialism (the most tangential in my mind).

The parade itself was mostly orderly except for a brief moment crossing Keren Kayemet where right-wing protesters were lining the intersection. Plenty of police were on hand and there were no incidents, but I thought it was unfortunate that those leading the parade felt it necessary to stop and stare down the protesters. I am not sure what it accomplished but in a confrontational country, people here are, well, prone to confrontation. One thing worth noting was for those familiar with pride parades stateside, this was really nothing like that. People were not, on the whole, flamboyantly or immodestly dressed, there was not much in the way of cross-dressing, and (other than the socialists) everyone seemed to be focused on the march itself rather than grabbing the attention of observers and bystanders. I cut out about halfway through as I was hungry, tired, and already had a very long day.

In the evening, I went to a bar on Rekhov Ben Sira for a goodbye party for friends leaving Jerusalem after half a year here. It was a fun, late night and well worth the time out. Today, I caught up on sleep, wrote this long post, and will soon run to the shuk to pick up food for dinner tonight. I am hosting my first Shabbat meal at my new place this evening… It should be fun. Now I must run. Thanks for reading and Shabbat Shalom. 🙂

7 thoughts on “Golden Gate, City of David, and Pride Parade”