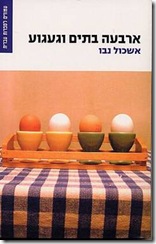 Consistently in ulpan, I have been pleasantly surprised to find that much of the source material from which we study forces us to engage with issues in the real world. Today was no different.

Right off the bat, we read an article in Hebrew detailing a conflict currently brewing in Israeli domestic politics over the division of pupils in haredi schools between those of Ashkenazic and Sephardic descent. The Israeli Supreme Court ruled that this segregation is illegal and must be rescinded.

In response, the parents of those that demanded the segregation in the first place refused to send their children to the school. As homeschooling is against the law in Israel, a number of parents were arrested. In response, haredim in Jerusalem were engaged in regular street protests until the court decided to postpone the implementation of its decision until the end of the year and the parents were released. While the crisis has died down for now, it has not been resolved. Again, here I will take no position on the issue, but I will say that I am thrilled that we have learned enough to discuss such complex issues in class with relative competency.

The rest of class was spent exploring different ways that notions of time can be introduced in compound sentences, e.g. I visited Eilat after which I returned to Jerusalem, etc. It seems a bit dull, which it is, but it is all part of learning the language. The rest of the time we worked further with noun constructs (smichoot) leaning how to identify and employ definite articles and adjectives in and within such constructs.

Now to the picture up top. One project we must complete during the course is a presentation on some artist of interest to us to the class. Several students have already presented and I am due up on Thursday. In anticipation, I have spent much of the afternoon and evening preparing my own presentation on the Israeli author, Eshkol Nevo. A friend gifted me a copy of the English translation of his book ארבעה בתים וגעגוע (Four Houses and Ga’agu’a/Longing), entitled Homesick. I have since picked up the Hebrew edition and am very slowly working my through it.

For the presentation, I will give a brief biography of the author and then read a selection from the book. I picked a really interesting passage in which one of the protagonists compares life in Tel Aviv to Jerusalem. It starts on page 309 in the Hebrew edition and 320 in the English. Want to know what it is? You should buy the book. 😀 I am also supposed to teach the class 5 new words they will need to understand the passage. All in all, it should be about 10 minutes long. I have quite a bit of work to do before then, but I am making progress.

In other news, I got in a nice run this morning around Givat HaTzorfatit and Har HaTzofim. I don’t like the early hours but it is the only time I have in which 1) it’s not incredibly hot, 2) or incredibly dark, and 3) I am not studying. Hopefully it will happen again tomorrow. Okay, that’s all for now. Thanks for reading.

This entry was posted on Monday, July 5th, 2010 at 12:03 pm and is filed under Books, Israel, Pictures. You can follow any responses to this entry through the RSS 2.0 feed. You can leave a response, or trackback from your own site.

4 Responses to Ulpan and Ga’agu’a