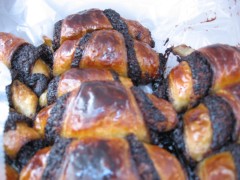 This will not be another post simply repeating verbatim what I learned in ulpan, because: 1) we covered some very interesting material in ulpan worth mentioning and, 2) I actually did some interesting things later in the day entirely unrelated to ulpan.

Ulpan began as usual first thing in the morning to early in the afternoon. Our first activity was to read an Op-Ed piece written for Yedihot Ahranot commenting on Tzipi Livni’s recent controversial criticisms of the current government. This was in response to the recent fiascos of neighborhood construction in Jerusalem and the continued imprisonment of Gilad Shalit in Gaza. For those who have forgotten, he has been held captive by Hamas since June 25, 2006. With the exception of one handwritten note, one audio recording, and one video over the past 4 years, there have been no signs of life. Hamas has refused even the ICRC access to Shalit in violation of international humanitarian law, and are demanding the release of some 2000 Palestinian terrorists from Israeli jails.

Livni claims that the current government has no real policy and merely follows the vicissitudes of public opinion. The author pointed out that while this might be true, it was also true of Livni’s government and of those of the last 30 years. The problem, he believes, is that those in power are so caught up with the concerns of the public and those of the international community, that they fail to formulate meaningful policy which is good for Israel as a whole. The author, failed, however to specify what the policy should be. For now, I take no position on the matter. In the context of ulpan, I am thrilled to mostly understand an Op-Ed which takes on such a complex topic.

Our other exercises focused on reviewing binyan nifal, the passive verb form in Hebrew, the basic structures of conjugation in the present, past, and future tense, as well as gerunds. As always, there are numerous exceptions to the rule to be learned. Afterward, we read through a children’s story about a sheep figuring out the best way to jump over a fence to lull a child to sleep. Clearly not everything we are reading is as complex as our pieces from the newspaper. That said, employing a variety of mediums and subjects can only improve our comprehension. No complaints bikhlal (at all).

After class, I met up with a friend of mine whom I haven’t seen since the last time I was studying Arabic at Hebrew U three summers ago. He has since made aliyah, gotten married, and moved to a suburb of Tel Aviv while studying for a Masters in Arabic at Bar Ilan. A lot of things can happen in three years! It was very nice to catch up.

Upon returning to Kfar HaStudentim, I caught the bus with a friend down to Mahane Yehudah, whom had yet to visit. As usual, the array of sites and sounds was overwhelming, the food was incredibly cheap, and the opportunity to speak Hebrew with the mokhrim was greatly appreciated. I picked up half a kilo of dried figs, apples, peppers, tomatoes, cucumbers, and fresh pita. I also picked up a small Artscroll Chumash. Once my Hebrew improves, I won’t need it but in the meantime, it’s nice to have around for Shabbat. We also stopped by my favorite bakery in Jerusalem, Marzipan, to pick up some fresh chocolate rugelah. My friend was impressed and I was happy to share the experience. I also picked up a bottle of Arak. When in Rome…

Next we made our way down Rekhov Yaffo down to Ben Yehudah where he was planning on buying a guitar at a music shop. Along the way, we stopped in at a number of bookstores. The last one turns out to be where a friend of a friend of mine works, whom I met last Saturday night. What a small world. From him, I bought the original Hebrew edition of the book I have been reading by Eshkol Nevo, Homesick. Since I will already know where the story is going, it seems that reading the original will be a nice baby step toward improving my Hebrew literacy. I also picked up a copy of Masekhet Ketubot, Talmud Bavli in which I have been told there is a segment where Chazal discuss the appropriate boundaries of the land of Israel, clearly relevant for my research. Now I need to work on my Aramaic. I will need some help with this one.

After my friend got his guitar, we took the 19 Bus back to the Kfar. For what it’s worth, this seems like a much shorter ride than the 4 which makes its way through both Mea Sharim and Ramat Eskol. The 19 skips both. Since then, it’s been a relatively relaxed evening of homework, studying for a test tomorrow, doing laundry, and catching up on news.  Now I need to get back to it. Thanks for tuning in.

This entry was posted on Wednesday, June 30th, 2010 at 12:31 pm and is filed under Israel, Pictures, Site News. You can follow any responses to this entry through the RSS 2.0 feed. You can leave a response, or trackback from your own site.

2 Responses to Ulpan, Marzipan, and Books