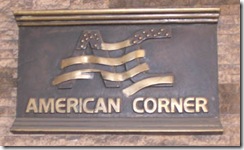 As is often the case on this trip, I expected a very slow day and instead got quite a lot done. Although getting a bit of a late start, I accompanied Rabbi Asiel to breakfast at the Belgrade Synagogue’s kosher kitchen. They make a very tasty and large meal for only 400 dinar… that’s only about 6 USD.

From the shul, I packed up my things and made my way across town back to Manga hostel. On my way, I passed by the National Assembly where national police instructed me I would have to cross the street. The President of Greece was in town for the day, and security was about as high as it ever seems to get here.  They honored the president by hanging a large Greek flag from one of the flagpoles outside the capital building instead of the regular Serbian flag; a nice gesture.

Once back at the hostel, I chatted with the staff, put my things away, and got a fresh change of clothes. Then I headed back into the heart of the city. My first stop was the Education Museum, not far from Kalemegdan. Other than housing a number of interesting displays telling the story of the evolution of Serbia’s educational system (thankfully with English captions included), it is home to a huge collection of primary school textbooks dating back to the 1800s. I spoke with one of the English-speaking proprietors about getting their assistance to peruse the history textbooks to see how the history of Kosovo is portrayed. It is my prediction that Serbia’s professed attachment to Kosovo as a historical entitlement will come out clearly even in the oldest of these texts. After some back and forth, they agreed provisionally to set up a meeting with me sometime next week to discuss materials.  Now all I need is a good Serbian translator in Chicago. Any takers?

I then walked up to Knez Mihailova and stopped into the church shop I visited last week before going to Kosovo. I filled the owner in on my trip and promised to stay in touch. On my way out, I ran into another one of the people I met a week earlier in the shop and I filled him in on the details of my trip as well. Apparently he saw me on television. 🙂 Yes, I was the American on Serbian National Television filmed at Gazimestan on Vidov Dan in 2009. Nice to have a little piece of infamy to call my own.

My final planned stop was at the American Corner, a small cultural center in downtown Belgrade that houses a large English library and an internet cafe, and hosts both English language classes and group discussions on various topics where Serbians can practice their English. On a tip from one of the staff at Manga, I went there to offer to lead a discussion group of my own. The woman working there was both welcoming and enthusiastic. As of now, it looks like I will be moderating a discussion on the future of Serbia and Kosovo for two hours in two weeks on Tuesday or Thursday evening. This will of course give me another wonderful opportunity to mix with locals and get a sense of opinions of the “everyman” about the state of Serbia-Kosovo affairs. Thanks Diane for the tip!

Finally I made my way back to Manga to drop my bag off, clean up, and write this post. Next I am off to the synagogue for Erev Shabbat services and then to Chabad for dinner. Tomorrow morning I will return to shul for Shacharit and see where the day takes me from there. Happy weekend and good shabbos!

This entry was posted on Friday, July 3rd, 2009 at 10:56 am and is filed under Pictures, Research, Serbia. You can follow any responses to this entry through the RSS 2.0 feed. You can leave a response, or trackback from your own site.