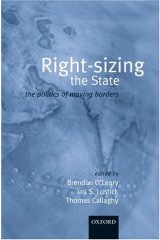 I am finally busy posting again; a clear sign that I am near the end of a quarter and trying with all my might to get out the last bits of work I failed to finish earlier in the quarter.

Here is a review of a very interesting edited volume about sovereign territoriality and the resolution of international and domestic territorial disputes: Right-Sizing the State: The Politics of Moving Borders.  It is primarily based on earlier work by Ian Lustick in his book from 1993, Unsettled States, Disputed Lands.  If you want the canned version, just read chapter 3 of this volume!  Or for an even shorter piece, just read the review.  🙂

On another note, does anyone out there know how to get a hold of Dr. Lustick?  One of these days I would love to actually have a conversation with him rather than just tossing back critical reviews.

One of the greatest challenges faced during the development of the modern state system has been the stabilization of borders vis-à-vis neighbors so that each state is able to both defend itself against external challengers and define the extent of its legitimate sovereign control. Until the First World War, the use of force to alter state boundaries was a common and relatively accepted form of political action on the world stage. It was not until the end of the Second World War that states violating the “sanctity” of existing borders had legitimate reason to fear a multilateral international response in the form of diplomatic isolation, sanctions, or counter military action even from those not formally party to the conflict. Although this territorial integrity norm has only developed gradually and imperfectly, it is notable that no effort at territorial conquest has succeeded without reversal by means of multilateral force and sanctions since 1975.[1] Given the centrality of the dynamics of state expansion and contraction to the development of the international system, it comes as a shock that theoretical approaches to understanding these processes are generally lacking in the political science literature.

One of the most impressive efforts yet to fill this void is Ian Lustick’s Unsettled States, Disputed Lands.[2] This book constructs a model of domestic political discourse that explains both when and how political elites within a state justify and ideologically frame state expansion and contraction. Using the cases of Britain, France, and Israel, he argues that territorial retrenchment is best understood through a two-threshold model. If elites wish to withdraw from a contentious territory, they must first deinstitutionalize hegemonic conceptions of appropriate borders to make the idea of state contraction rhetorically and politically comprehensible. The next step is to overcome debates over dire consequences of withdrawal for regime survival. Here the debate crosses the incumbency threshold where withdrawal remains contentious but threatening only to those who remain obstinately committed to control of the disputed space. It is from this framework that the edited volume Right-Sizing the State begins.[3]

This collection brings together a number of impressive essays from scholars with strong individual insights into the question of state expansion and contraction. Minor but important adjustments to the theory are provided by the volume’s co-editor, Brendan O’Leary, in the form of a taxonomy of strategies by which states facing territorial dilemmas may either eliminate or manage difference. Eliminating difference may be achieved negatively in his view through genocide or ethnic expulsion, or it may be reached constructively through territorial elimination in the form of secession, decolonization, or partition. The further option of political homogenization of difference is treated rather skeptically. In terms of managing difference, negatively this may be attempted through control strategies, or more constructively through arbitration, federalization, consociation, or the granting of autonomy to disputed areas. Where Lustick’s framework brings an understanding of under what conditions a state may attempt expansion or (more likely) contraction, O’Leary’s complement provides a general sense of what means through which this might be accomplished.

While the framework provided is both logical and compelling, there are a number of theoretical and empirical issues readily evident. Among those that the authors themselves identity are a questionable use of Gramsci’s concept of hegemony in that “non-discussable” integrity of the territory in dispute rarely holds either outside the halls of power and within the territory itself, a neglect of the role of ideas held by those not living in the metropole both “settler” and “indigenous”, and a failure to address the historical form of incorporation pointing to the dominant mode of production and political organization of both the territory prior to settlement and the metropole at the time of territorial incorporation. The framework also crucially misses the role of international pressures in pushing national elites towards either incorporation or withdrawal.

Two papers in particular that take this somewhat into consideration are Marc Lynch’s chapter, “Right-Sizing over the Jordan” and Oren Yiftachel’s “Right-Sizing or Right-Shaping.” Lynch’s chapter focuses on moves by the political elite in Jordan to consolidate the state around the East Bank from the mid 1980s onward. He is consciously aware of the strategic moves by King Hussein and later his son Abdullah to define a Jordanian identity as explicitly not including the Palestinians in the West Bank while seeking to maintain a degree of ambiguity about those living in the kingdom. The intent, he demonstrates, is to avoid existential challenges to its identity and political existence internally from the Palestinian majority and externally from Israel which has claimed that “Jordan is Palestine” as a way to avoid pressures to withdraw their own claims from the West Bank. While there is certainly a high degree of correspondence with Lustick’s two-threshold model at work in Jordan, Lynch’s consideration of the broader international pressures that have helped constitute Jordanian identity, territorial or otherwise, make for a much more nuanced and empirically valid account.

What Lynch misses, however, is why this move should not be seen as particularly astonishing. Unlike the historically embedded narratives of nationhood corresponding to identifiable territories evident to varying degrees in Israel, Turkey, Egypt, and Iran, Jordan’s borders and presumptive “ethnic” character were largely defined only in the decade or so before the state’s independence. Carved out of the Ottoman Empire and largely arbitrarily bound between its neighboring states, the shape of Jordan was reflective of colonial cartography not of a distinct national history. Although the state’s elite certainly faced domestic challenges in redefining the state as existing without the West Bank, it is difficult to make the claim that 19 years of control are sufficient to make any territory into an integral part of the national identity where one was previously lacking. To his credit, Lynch ends on the important point that although Jordan now enjoys a solidly institutionalized consensus with regard to its borders, questions over the distribution of power and benefits within the state remain. As should be expected with a state still in the early processes of national development, Jordan has a long road to travel before its domestic identity can become consistent with its external territorial character.

Yiftachel’s chapter is probably the most critical of Lustick’s framework noting that he fails to account for critical issues such as the ethnic geography, demography, and geopolitical context of the state engaged in a territorial dispute. Using the cases of Lebanon, Cyprus, and Belgium, he illustrates that the success of right-sizing is critically laced with the issue of right-shaping, that is building a domestic political framework that is capable of effectively and justly dealing with the competing claims of ethnonational groups within its territory. This focus translates to an emphasis not on changing state borders but on policies that make states in their given contexts operate better with respect to discontented identity groups. In this sense, he also deals more directly with the normative “rightness” of state boundaries and powers than any of the other authors. Unfortunately, while making the none-too-implicit argument that states divided by ethnic cleavages should seek a politics of accommodation, he provides very little sense of how a state might get there. In fact, he credits the success of federal or consociational arrangements to largely uncontrollable contingent factors, that is to be in a state in which ethnic groups are largely geographically mutually-exclusive in a favorable geopolitical setting. Here Belgium is seen as successfully navigating its ethnic cleavages while Lebanon and Cyprus have not. Not only does this conclusion suggest very little in terms of means to improve conditions in already ethnically divided states, but it suggests that population separation might be the best means to resolving persistent nationalist conflict. While this has certainly been a dominant historical mode of intrastate conflict resolution up until the late 1940s, both the editors and Yiftachel have argued that population movement is an illegitimate means to the desired ends. Resolving this theoretical and ideological dilemma seems necessary if effective policy prescriptions are to be made.

Finally, the book as a whole must be critiqued for failing to engage with the basic question of “rightness” itself. For O’Leary and Lustick and indeed for all the authors in this volume, the issue of right-sizing is explicitly one of matching the preferences of political agents at the center of existing regimes with what they regard as appropriate external and internal territorial borders.[4] Implicitly, however, right-sizing is about addressing those claims to territory that challenge those of the state and finding ways to satisfy those counterclaims. When it is argued that the utility of deinstitutionalizing existing hegemonic boundaries is to open the space for a wider array of options for negotiation, it is implied that these borders should be problematized.[5] Rather than asking whether or under what conditions it is “right” to change the territorial status quo, the authors start from the assumption that pressures for the state to retrench, withdraw, or decentralize are “right”. While it is understood in these cases that a state’s control of a particular territory is destabilizing enough that withdrawal should be considered, it is never considered what makes for a legitimate claim to contest a state’s control of a territory. Nor is it ever considered what the negative implications of withdrawal itself might be. While such a priori arguments are par for the course in international politics, we should demand more critical engagement with these crucial questions from political scientists, particularly those who claim to be seeking “right.”

Zacher, Mark W. “The Territorial Integrity Norm: International Boundaries and the Use of Force.” International Organization 52, no. 2 (Spring 2001): 215-50.

This entry was posted on Sunday, June 8th, 2008 at 10:03 pm and is filed under Books, Research, Reviews. You can follow any responses to this entry through the RSS 2.0 feed. You can leave a response, or trackback from your own site.